Teenagers In The House 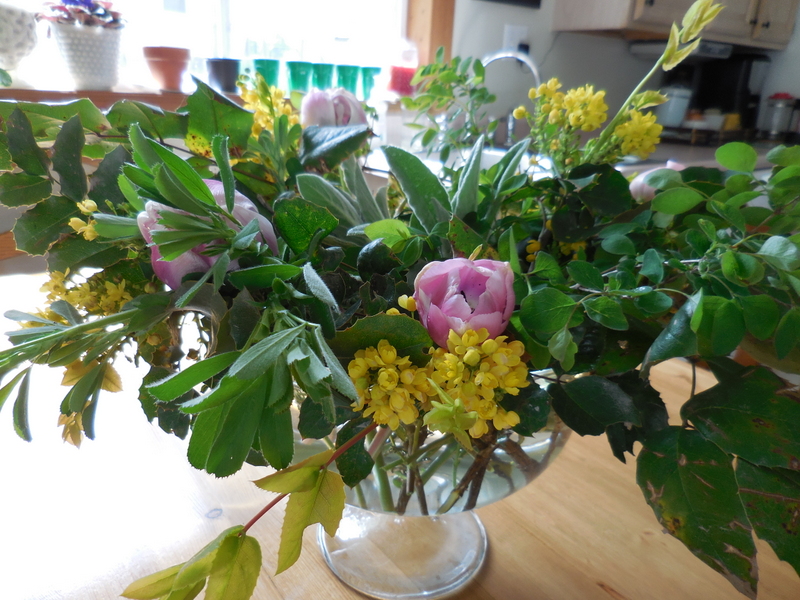 Let me tell you about my last weekend... there were rumors of earthquakes in Sandpoint and the news of a big one in Tibet. I heard there were tornadoes in the Midwest/southern states and in Chile a volcano spewed. 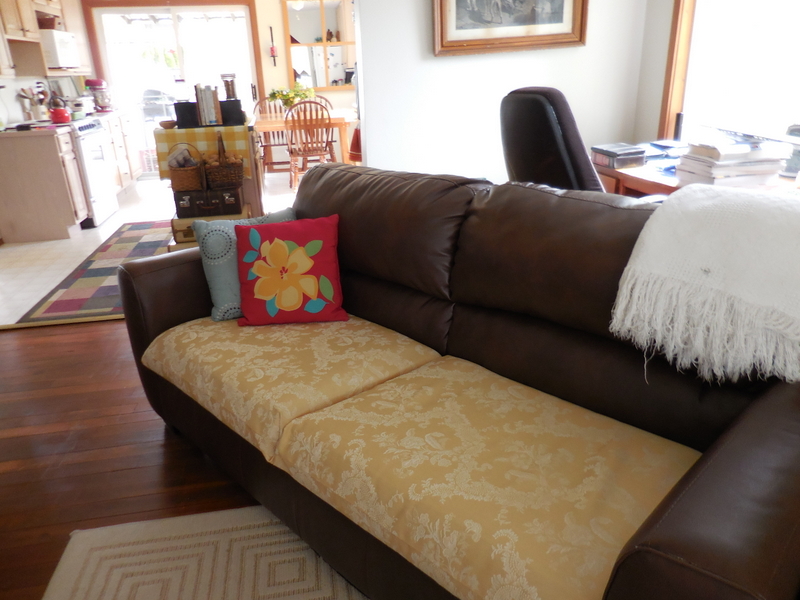 Meanwhile, I went to the thrift store and spent six dollars on old drapes to make new couch covers for the falling apart fabric on these poor couches. And I arranged flowers for fun and worked in my gardens and wrote stuff of no importance to you. Aren't you glad I spared you? 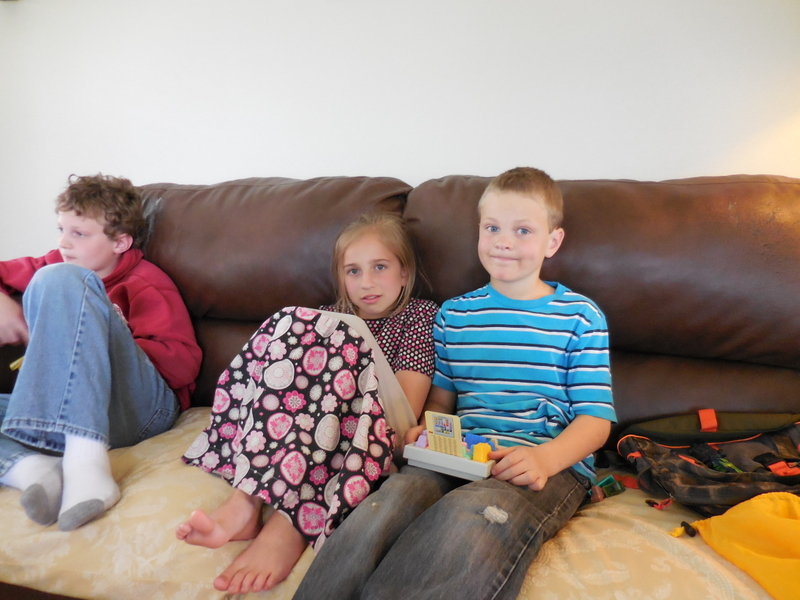 On Friday afternoon, I had coffee with a forever friend and then took my son for his almost last driving session with his instructor. Then back to the school to gather my other two kids plus four more. We came home to snack and play. Two hours later back to the school for driving son. Then a delivering of other four kids to their home and on to the grocery store for birthday supplies for Toria. 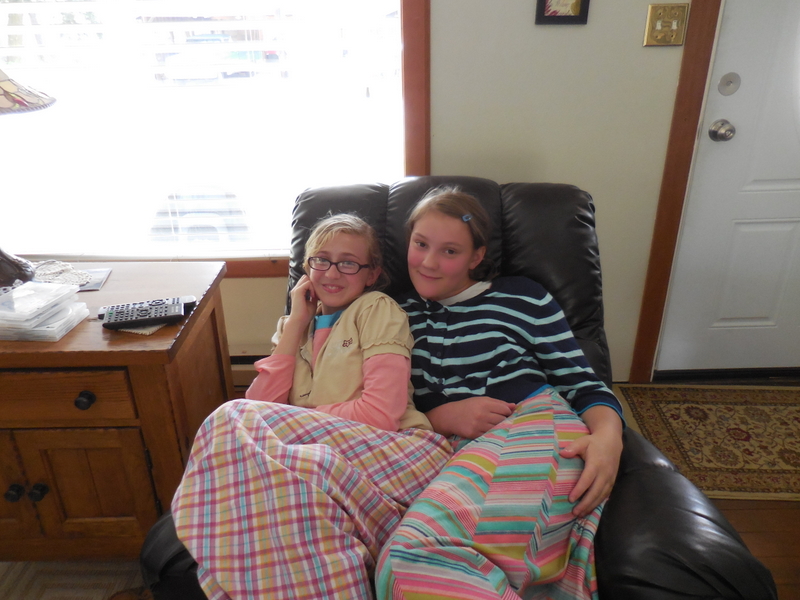 Somewhere in my day, I caught up on laundry and food because I had to do the mail Saturday. Saturday, the kids were home alone doing my long list of chores while their daddy worked a 16 hr shift at the hospital and I sorted and delivered mail. I didn't get home till three, after which,we turned around and went to collect these girls for the "Party".  I was at 599 Chokecherry at 2:30, asking God how He was going to work out the details for Laife to get to his last driving session at three and to also go get the girls. Fifteen minutes later, my sister in law called and offered to bring her daughter and to take my son to driving. See what God does when I ask for help? 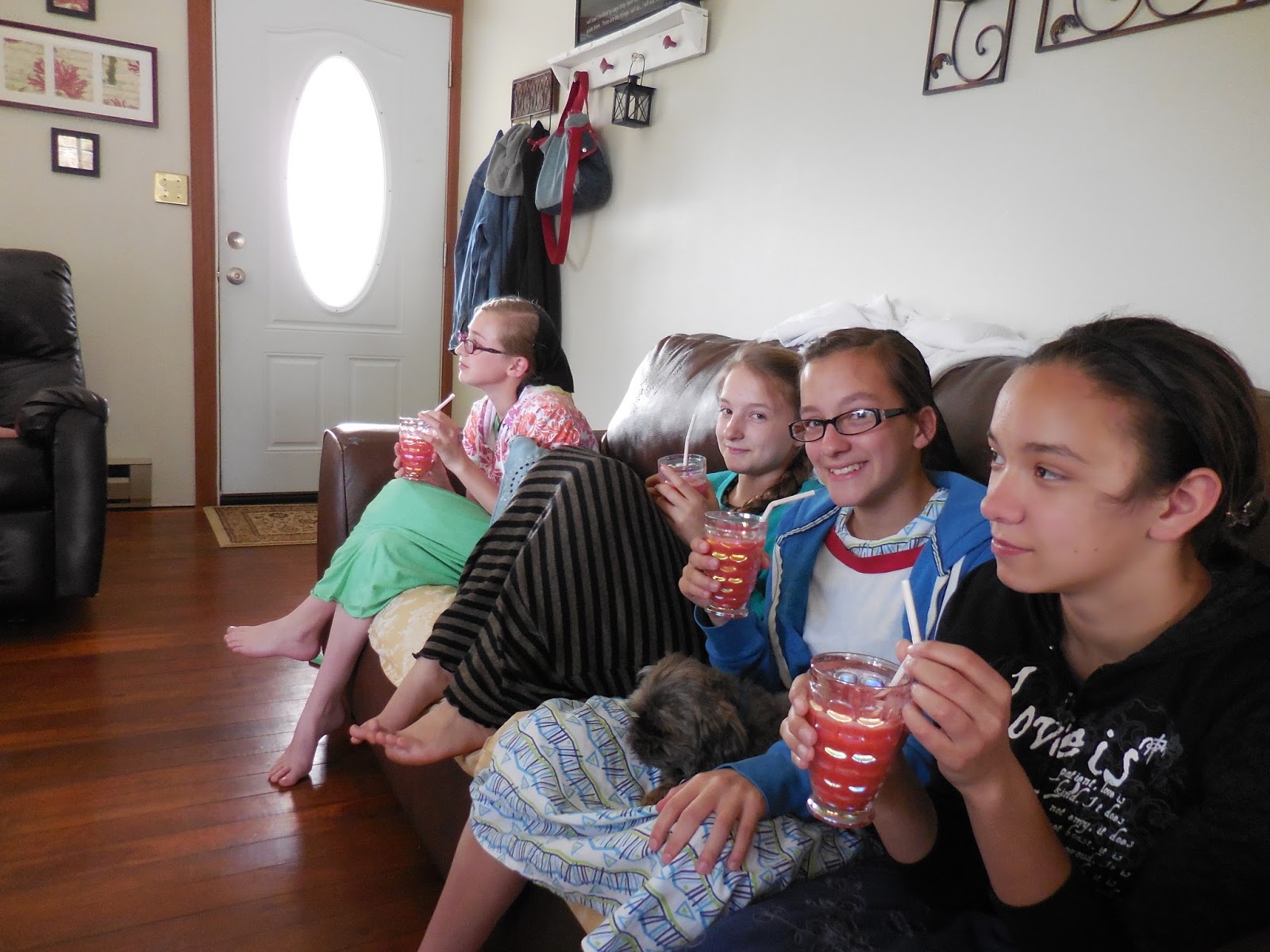 We had so much fun with these beautiful young ladies. All are thirteen year old. We started out with strawberry sorbets. And a movie of course. 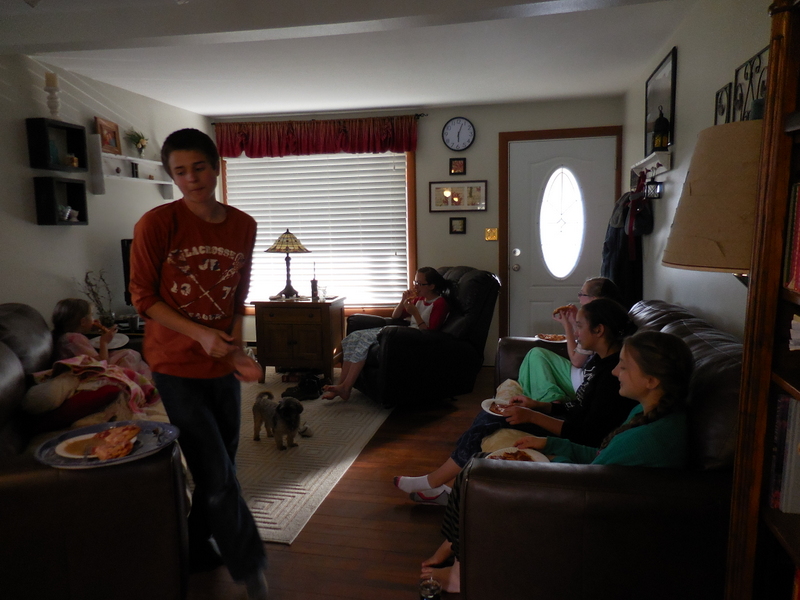 This was another movie and pizza after I went to get Laife at the school and he drove me home with his newly acquired permit. I was proud, not scared! I also feel old having a son driving. I look over at him driving and wonder if I have wrinkles and chin hairs poking out. I sit up straight as possible so as not to appear bent over. I reach feebly for my cane... 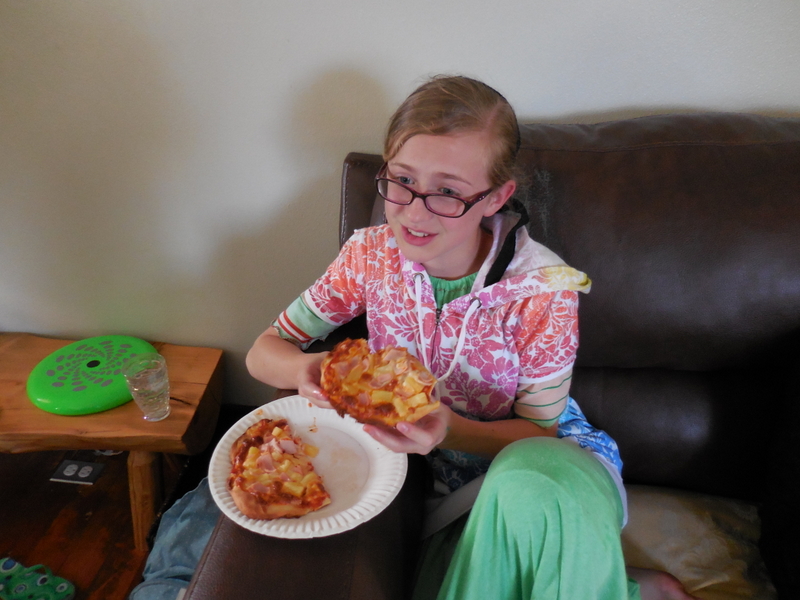 In be tween movies they made their own personal pan pizza and played with Toria's new Frisbee. 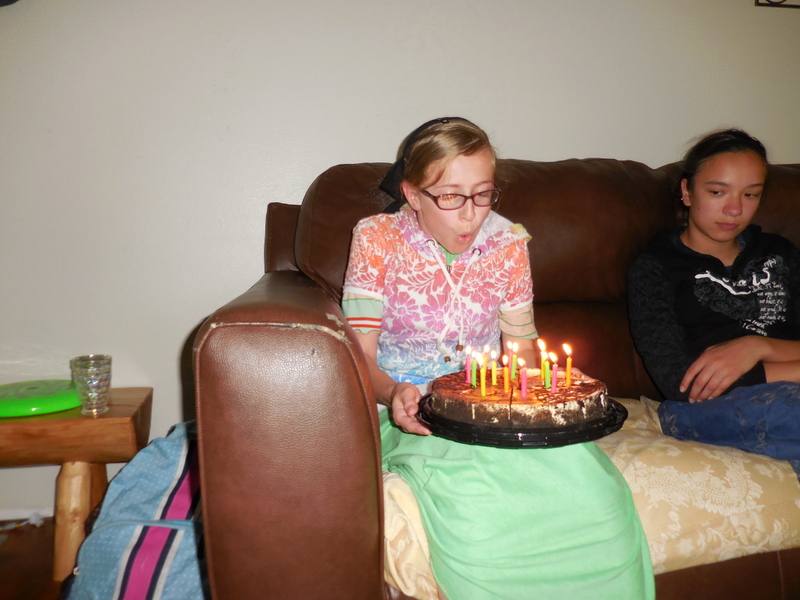 Cheesecake was the choice of cake this year. 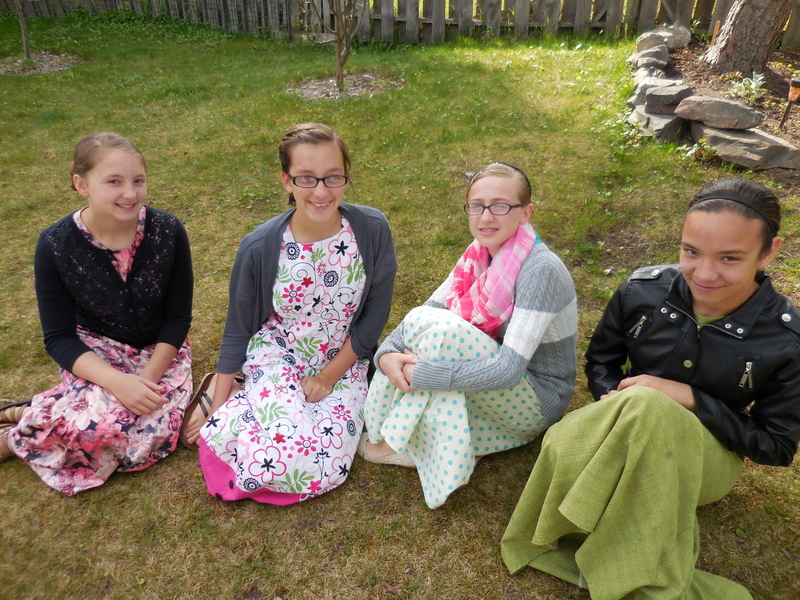 I love this age. Andrea, the one in white and pink, sitting beside Toria said, "Yes, we're blossoming," in a very prissy voice after I told them they were all so pretty. I think she might have heard that before, about being pretty... 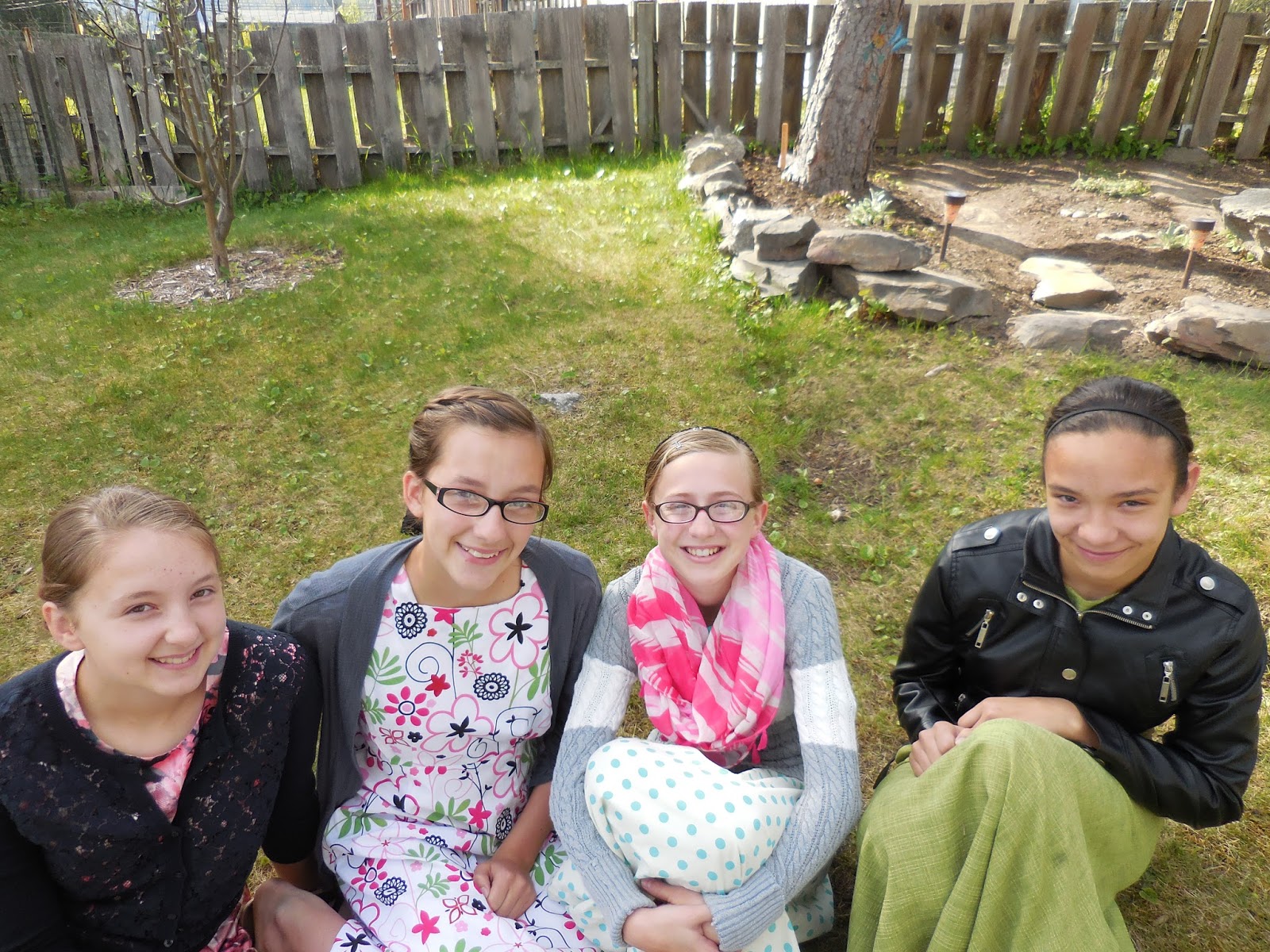 So...We stayed busy... Bruce had to work the weekend...Staying busy was needed. AND, it was a great weekend. While the earth groans and travails, we go on living and little girls turn into teenagers. Spring comes regardless and our firstborns get their driving permits... Have a good week!